Loading SWF for the first time...
Adobe Flash is required to run this project in the browser. Enable Flash
Support This Game

This is a game made for Ludum Dare 38. It's a pretty weird idea.
You start the game assigned a randomized species that has 6 stats:

A world is generated, full of biomes and other species.

You simply need to try to expand your population by migrating from one tile to another.

When you migrate, you take half of your population from one tile, and move it into a neighboring tile.

Click a tile that you own (it will have a number between 1 and 10 (*) on it), and then click the "Migrate From" Button, then select a neighboring tile, and click "Migrate To"

You can see the properties of neighboring tiles, but you won't know if it is occupied or not until you migrate into it.

If the tile is empty, you will simply claim it. If it has another species occupying that tile, you will have to do battle with them to take control.

Battles use Attack, Defense, and Dexterity to determine the outcome of the conflict. If you win a battle, the other species is eradicated, and your surviving population takes control of that tile. If you lose, you lose the population sent to that tile, but you might weaken the enemies population for another attempt.

After each migration, the world is updated and every tile that is occupied will have their population increase or decrease based on how compatible the biome is to the species in that space.

So... yeah, that's about it! I had more plans for having win/lose conditions, but not enough time to implement them. If I wanted to go further with this game, I have a lot of plans, like, random events that take place and do things, giving the player ways to upgrade or level up their species... having the enemy species move and try to migrate as well, etc... 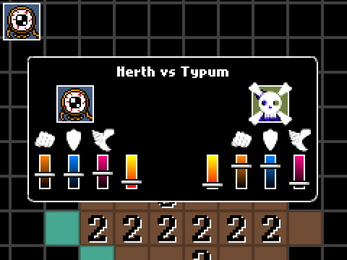